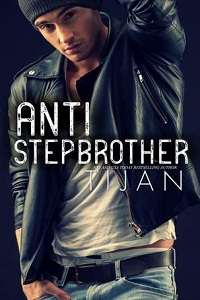 Kevin was kissing another girl. And he wasn’t just kissing her—he was inhaling her. He pressed against her, her dark hair twisted in his hands, his lips moving down her throat and lingering between her breasts.

It was a trainwreck.

I saw it coming. The lights were bright and impending, and I could have gotten off the tracks. But nope, I was the idiot blinded in place. I couldn’t look away, though I should have.

This was Kevin—my Kevin! Okay, not my boyfriend Kevin, but my stepbrother Kevin. The same Kevin I’d been in love with for two years—since my junior year of high school, since my mom died and my dad decided he was in love with the most popular guy in school’s mother.

Sheila Matthews, aka Kevin’s mom, was the nurse who took care of my mom during her stay in hospice. It had been such a scandal. How dare Mr. Stoltz fall in love even before his wife passed? It didn’t matter that my mom had been dying of cancer for years. My dad’s timing sucked, but it happened. The night after my mom was buried, he was at the Matthews’ house.

One positive, even though my dad and Sheila hadn’t kept their relationship a secret, was that I didn’t have to meet her until later. Actually, I met her at the dinner where I also found out she was going to be my stepmother, and so the summer between my sophomore and junior year, I got a stepbrother, too. Of course, I already knew who Kevin Matthews was.

Everyone knew who Kevin Matthews was.

A year older than me. Football captain. Basketball captain. Track captain. He was on the Student Council—and I’m ashamed to admit I never paid attention to what he did for them. I didn’t really care. He was so much more. He was the guy all the guys respected and all the girls wanted, including me and his rotation of six-month girlfriends. He’d date a girl for six months. Then they’d break up because he’d fallen in love with another girl, and she’d last the next six months.

Despite all my knowledge of him, before he joined my family, Kevin didn’t know who I was. I wasn’t anyone special. I mean, I wasn’t unpopular. I was just…average, I guess. I’d been told I was beautiful, but that was by all the people who were supposed to tell me that. My mom told me every day, then my dad every month or so, and finally Sheila did once we moved in. She said it every two weeks. It was nice to hear, but come on. That’s what parents are supposed to do. All three of my parent-like figures did their job well, and so did my two best friends, May and Clarissa.

May was a feisty little Asian who got asked out on a weekly basis, even when she had a boyfriend. And Clarissa was a few inches taller than me with a body like Britney Spears circa “Oops!...I Did It Again.” I had long, dark brown hair and a slim-enough body. I’d never thought I was anything great, but both May and Clarissa had made enough comments about how they’d kill to look like me that I began to feel more confident.

My mom always told me I had perfect lips and almond eyes with long eyelashes that I’d inherited from my father’s side. My grandmother had been gorgeous. I never met her, but in photographs she had dark eyes, dark hair, a heart-shaped face, and an alluring air to her. May and Clarissa saw a picture of her once and fell back on the bed, groaning at how much I took after her—something I hadn’t realized until then.

So yeah, none of us were hurting, but we never really made it into the popular and exclusive high school social circles. Maybe it was because the three of us had our own exclusive clique, or maybe it was because none of us passed out at parties, slept around, or joined the cheerleaders. Nothing against anyone who did that. It just wasn’t us.

We were almost boring.

We got good grades. We went to a few parties, but not every weekend. Bowling, slumber parties, shopping trips, and regular old going out for dinner were our social activities. I could’ve lived at the local bookstore too, so I think that’s why we weren’t at the top of the food chain where Kevin and most his girlfriends were. And not that we wanted to be. Well, May might’ve wanted it, but Clarissa and I were content.

Every now and then, Kevin would date someone at the social level below. Once he dated a girl who was two levels below, and pandemonium hit the hallways. Girls wore skimpier clothes. The hallways smelled like a professional salon, and I heard that the makeup aisle at the local department store sold out.