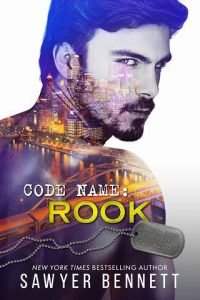 After twenty-three hours on two different military transport planes, plus one uncomfortable commercial flight sitting next to a guy who fell asleep with his head on my shoulder, the one thing I should want to do upon arriving back in Pittsburgh is go to sleep.

Yet, I’m not the least bit tired. If anything, I’m amped and still riding high on the sweet balm of victory our team had just two days ago when we rescued our teammate Malik from his captors deep in the Syrian desert. Many had given him up as being dead—namely, our own government. But our boss, Kynan McGrath, head of Jameson Force Security, never did. We kept digging, investigating, and offering a fuck-ton of reward money for information on him. He’d been captured after a hostage rescue gone bad five months earlier, and we were convinced he was being held—and most likely tortured—for information.

My other teammates, Tank and Merritt, had traveled with me. They’d invited me to go out with them as we were grabbing our gear in baggage claims.

I declined, not because I don’t like the guys—I really do—but because even though I’m pumped over the solid victory, I’m also feeling the need to be reflective about it.

I’d taken a life while rescuing Malik. While I don’t have a single regret for putting a bullet in his captor’s head—one of them, anyway—it’s a massive responsibility to carry that weight. I feel like being reflective with a few drinks. If I’d gone out with Tank and Merritt, we’d all get shitfaced and probably end up in some kind of trouble.

And also… I’m in the mood for something a little softer to end the evening with. Preferably a beautiful woman with curves in all the right places, and Tank and Merritt aren’t the best wingmen.

So I make a quick stop at my apartment, which is actually within the Jameson headquarters, drop my gear, and take a quick shower. Thirty minutes later, I find myself in a downtown Pittsburgh bar that’s not too upscale but is most definitely not a dive bar. I’ve never been here before, so I don’t know anyone, but that’s how I want it tonight.

I nurse my first two beers sitting on a bar stool, bent over my phone to catch up on the news, Facebook feeds, and personal emails. While on my third beer, I swivel my seat to face the crowd and people watch.

The patrons are a mix of twenty and thirty-somethings for the most part. The music is trendy and designed to get people on the dance floor. There seems to be an excessive number of women compared to men, but then I realize one large group appears to be having a bachelorette party—at least, I assume that’s what it is considering one woman is wearing a veil, tiara, and a sash proclaiming her “Bride-to-Be”.

My gaze moves past that group, across the gyrating bodies on the dance floor—a place no one will ever find me—and over to a smaller group of women sitting at a large round table. Several drinks and empty glasses fill the table, along with a few empty plates. There’s a lot of laughing and animated talking going on, and I’d bet anything they’re out to have a good time tonight.

Vivid red hair catches my attention as a tall, willowy woman walks up to the table, then sits in one of the chairs. She immediately grabs one of the drinks, takes a deep gulp, and joins in on the conversation with the other women. Through the swirling lights and strobes, I get flashes of her.

Her face is stunning.

Can’t tell the color of her eyes other than they’re light. I’m guessing green, like mine, but possibly blue.

She’s engrossed in her friends and doesn’t spare a glance around, which enables me to watch her while enjoying my beer. After several long moments, I realize I don’t quite have it in me to break in on the tight-knit group just so I can hit on the redhead.

I’m tired from my travels, from killing a man, and from the inevitable fall from the adrenaline rush of the rescue. Swiveling my seat back around to face the bar, I decide to head home after I finish my drink.

It takes me less than five minutes to down the rest of my pint. As I pull out my credit card to settle my tab, I feel a tap on my shoulder.

Tipping my head back, I blink in surprise to find the gorgeous redhead. She glances at my empty glass and the credit card in my hand, then asks, “Can I buy you another beer before you leave?”

No longer tired, I push off the stool and offer it to her since the ones on either side of me are taken. “No, you can’t buy me a beer, but you can let me buy you a drink. What are you having?”