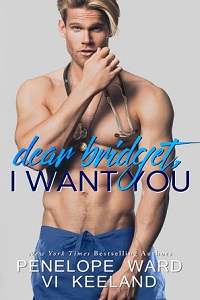 Tuesday. That’s what my underwear said, even though it was Friday. Right across my ass in big, bold letters. A few months ago, when the airline had lost my luggage during my trip down to Florida to visit my mother, I’d picked up a package of cheap undies at Target. Of course, I had no idea there was anything printed on them at the time. And I wasn’t about to throw away seven pairs of perfectly good underwear when I eventually realized. Plus, how long had it been since anyone had seen my underwear anyway? Two years?

The nurse came back into the treatment room to take my history. “Why don’t you have a seat, Ms. Valentine?”

“Do you know when the last time you had a tetanus shot was?”

“I’m a nurse over at Memorial, so I get them regularly. Last year, maybe.”

“Okay. That’s good. How about pregnancy? Any chance you could be pregnant?”

“Not a cold chance in hell.”

Even the sixty-year-old nurse looked at me sympathetically. “Dry spell, huh?”

“You could say that.”

“He’s our resident. A real young hottie.” She winked.

Great. Just great. I wasn’t just going to be mortified in front of the first man to see my ass in years, it had to be a young, handsome doctor. “Do you have anyone else on call, by any chance? Maybe a female doctor or an older, male physician, perhaps?”

The nurse stood and closed the chart she’d started for me. “Don’t worry, sweetie. You’re in good hands. I’m positive Dr. Hogue has seen his share of ass.”

A few minutes later, I was trying to ignore the pain and distract myself by scrolling through my phone while I waited for the resident on duty, when the door opened.

I turned around and froze.

Seriously? This couldn’t be the doctor. We definitely didn’t have any doctors that looked like this over at Memorial.

“So, I hear you want to show me your bum, and I’m not even going to have to buy you some dinner first?”

My bum? Of course, young, hot doctor had an equally hot accent, too. Was he…British? I pulled the gown I was wearing closed tighter. “Please tell me this is a joke. You are not the doctor. How old are you even? Twenty-two?”

He didn’t seem the slightest bit offended by my comment. Instead, he leaned against the desk and folded his arms across his chest. “Twenty-nine. Would you like to see my driver’s license?” Then…he smiled. Oh God. Perfect pearly whites, too. Figures. The man was downright gorgeous. Tall, really tall—probably at least six foot two, broad shouldered, muscular arms, bright blue eyes, a chiseled jaw, and blond hair that looked as if he’d just had sex. Jesus…the doctor had fuck-me hair. I couldn’t possibly show him my ass.

He looked down at my chart. “No can do, Ms. V. It’s three o’clock. You arrived right at the change of shifts, so it’s me or the janitor with a rusty, old pair of pliers—he might be able to help you out. Come on. Don’t be shy. Let’s have a look, shall we?”

Ugh. It was either Dr. Dreamy or the ER across town that I worked in. And I’d never live this one down if I went to Memorial. I rolled my eyes and huffed. “Fine.”

Just wanting to get the humiliation over with and get the hell out of here, I turned around and leaned over the examining table. I then proceeded to reach back and pull my gown aside to expose my left ass cheek. I’d already tucked that side of my underwear into my butt crack to keep it from getting tangled with the hook.

Dr. Hottie was quiet for a long moment, but when he spoke, I heard the laughter in his voice. “Have you been wearing them for three days?”

“What?” I turned to look back at the gorgeous doctor. His right hand was scratching at the stubble on his chin, while his left was holding onto his elbow.

“Your knickers. It’s Friday. They say Tuesday. I was wondering if you’d been wearing them for three days or just got your days of the week mixed up.”

I seriously would’ve rather kept the hook in my ass. “I bought them when the airline lost my luggage during a trip. I didn’t realize what was printed on them. You know what. I’ll keep the hook.” I dropped the gown back down and stood.

Dr. Hogue put his hands up in surrender. At first he seemed sincere. “I’m sorry. I shouldn’t have made that comment. It was inappropriate.”

“It’s bad enough you’re already…” He grinned. “…the butt of the joke. You don’t need me to poke fun.”

“I’d rather be one than have a fish hook in one.”