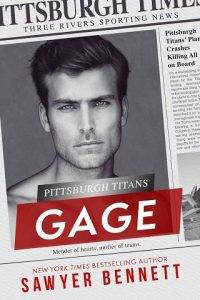 I’m getting to know Pittsburgh well, particularly the North Side where the arena is located. The city is comprised of several contiguous neighborhoods in which many of the Titan players live. I promised our goalie coach, Baden, that I’d help him move his friend Jenna into an apartment this afternoon, and my navigation system tells me it’s less than a mile from the arena. I finished up a workout with Stone, then spent a bit of time reviewing game film on my own before heading out.

Coming out of retirement, and as the oldest Titan on the team at age thirty-five, I always have to go above and beyond to maintain my position on the first line. That means not only stellar play on the ice and keeping my body in optimal physical condition, but also getting to know my opponents. I’d been out of the league for almost a year, having retired from the Seattle Storm where I spent the last seven years of my career.

I thought I was done with hockey, but apparently, hockey wasn’t done with me.

When Callum Derringer called with an offer to join the Titans after a devastating plane crash wiped out their roster, I reached deep inside to determine whether I still had what it takes to be competitive.

I knew it wouldn’t be a problem physically. I’m still in great shape—some would say the best of my life—but it remained to be seen whether I had the heart for it. I decided to retire last year because, frankly, I wasn’t getting the same thrill from competition that once drove me. I didn’t feel like I was leaving anything on the ice when I walked away.

The prospect of skating with a team that was being built from nothing appealed to me, not only the challenge but the opportunity to be a part of history within this league. To help shape and form what would hopefully be a new dynasty spoke to my conscience more than anything. The ability to mentor young players moving up from the minors who would be out of their element. Helping a city still reeling from the loss of its beloved hockey team.

Simply put… I wanted to do some good with my life, and this seemed like the way to make that happen. I had nothing tying me down to prevent me from accepting. The money offered—while very nice—wasn’t important. Between my previous salary and endorsement deals, which I wisely invested, I wouldn’t have to worry about finances for the rest of my life.

In the end, it was an easy yes, and I don’t regret a thing.