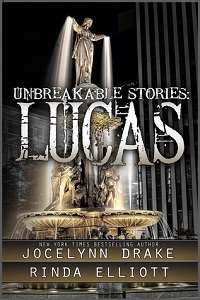 Shoving his keys into his pocket, Andrei pushed the front door closed with his shoulder then locked it, while balancing the pizza box across his open left hand.

As he turned back, something inside his chest eased, a hidden tension he hadn’t even realized was there until it was already slipping out of his body.

Lucas’s penthouse was exactly as he remembered it when he’d last stood there more than a month ago. The wide open floor plan and wall of windows looking out on the city was stunning. The sun had set an hour ago and now the lights of downtown Cincinnati reflected off the Ohio River and glowed against the velvety black sky.

Lucas had one of the best views of the city and Andrei didn’t think he’d ever grow tired of it, but there was another sight he was looking forward to even more. A certain sexy, bossy CEO who had a smile that made him weak in the knees.

For the past week, Lucas had come to him almost every day after work. He’d even stayed overnight a few times. Falling asleep tangled in Lucas’s long limbs and waking to slow kisses was fast becoming a perk of dating Lucas that he couldn’t live without. Just having the man relaxed and in his arms had gone a long way to settling the last of his lingering fears over Lucas’s safety.

But two weeks cooped up in his small, dark apartment had left Andrei restless and edgy.

That was over now. Today’s trip to the doctor had seen his cast removed and he was officially cleared for more strenuous activity. The doctor cautioned him to go slow, but Andrei was free to go back to work on Monday.

In the meantime, he had three nights and two full days to test his body with Lucas and he was looking forward to every second of it.

After placing the pizza on the island in the center of the kitchen, Andrei shucked his leather jacket and tossed it over the back of the sofa before continuing to the stairs in search of Lucas. Would it be too much to hope that he was already in the bedroom waiting for him?

Other than a little heavy petting and some frustrated grinding, Lucas had crushed any efforts for them to go farther, using the excuse that Andrei needed to heal first. Andrei was putting an end to that bullshit tonight, too.

Lucas’s deep voice echoed down the hall as he laid into some poor employee. No, the sexy man was not in the bedroom but his office. Biting back a sigh, he leaned against the doorjamb, his hands shoved in the pockets of his faded jeans as he watched Lucas prowl behind his desk with his cell phone pressed to his ear. The CEO had shed his jacket and his tie dangled loose around his neck. The white sleeves were rolled above his elbows, exposing strong forearms.

Damn, he was sexy. Lucas’s every movement was sleek and smooth, exuding barely restrained power. He was a man born to lead, to protect, and to command respect. It radiated from his bearing and was stamped in his features. Andrei almost had to laugh.

Watching Lucas now, he had to admit that he hadn’t stood a chance. A groan rose up his throat as he thought of pinning Lucas down to the desktop, tearing away clothes to get to the warm, golden skin that lay beneath. He wanted to lick every wicked inch of him so that his hard muscles strained and jumped under his touch.

As Lucas paced, a scowl twisted his features. He paused and started to lean down to his laptop when he caught sight of Andrei. Lifting one finger, Lucas indicated he needed more time to deal with business. Not a great start to the night Andrei had planned, but he understood. Building a multi-million-dollar empire wasn’t something that could be done with your typical nine-to-five schedule.

With a nod, Andrei returned to the first floor where he grabbed a slice of pizza and opened the messenger app on his phone. He sent a quick text to Rowe stating that the doctor had cleared him for work.

Another text went to Ian informing the young man that his cast had come off and that he was finally free of his apartment. Ian had been checking on him regularly, helping to keep him sane through the boredom.

Rowe immediately fired back: There’s no way that fucking witch doctor cleared you for fieldwork.

Cast off. Mobile. I can work.

Fuck. You’ve got paperwork to finish.

Andrei growled at his phone as he typed: No way. I took care of most of that bullshit already.

You can run training classes for the next two weeks.

Is this your way of getting me to quit?

Before Rowe could answer, a text rolled in from Ian congratulating him on his progress and promising to have a table at Rialto saved for him and Lucas for Saturday night at eight. Andrei grinned and reined in the urge to comment that if he and Lucas were walking Saturday night, they’d be there. Hell, Andrei was hoping to not put pants on again until Monday morning. Instead, he opted for a polite, We’ll be there.