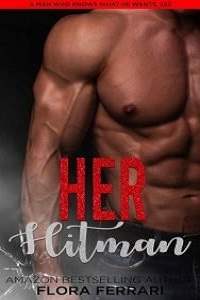 I take out the clip and examine the ammunition, making sure that everything is as it should be. Sparky watches me from his place on the motel bed, his tongue hanging out, tired and panting from our play wrestling. He tilts his head like he always does when I insert the clip with a metallic click, and then goes back to his wide-mouthed grinning.

“One last job, boy,” I say, placing the gun with the rest of my work materials on the table.

The motel curtains are drawn, letting in the last of the winter sunlight. The world has already started to turn hazy, and the light in here is even more so with the thick purple curtains, causing it to shimmer with particles of dust.

I sit on the edge of the bed and feel it compress beneath my weight, the mattress giving a whine as it takes all two hundred and fifty pounds of me. Sparky climbs into my lap and curls up. I move my hands over his small body, his black and gray dappled fur. He’s a piebald sausage dog, his legs short, his body squat. When I see how bulky and happy he’s become this past year and a half – compared with the misery I found him in – I almost let a smile touch my face.

But men in my business don’t smile.

Sometimes I wonder what I did before I had Sparky. I would go whole months without speaking, a loner drifting through life, existing at the edge of society with only my work to keep me company.

It was different when my uncle was still alive, but Felix has been dead for almost two decades now.

“Forty-one years,” I muse, tickling him under the chin. His tail wags sleepily. “That means I’ve been at this shit for thirty years, almost. Can you believe it? Time really does fly, eh?”

He murmurs groggily and I sigh, gently placing him on the bed and then wandering back over to the table.

I’ve got my rifle, my gun with the silencer attached, garroting wire, bolt cutters, night-vision goggles, foot-wraps to keep my footsteps quiet and make sure I don’t leave any prints behind.

I sigh and reach for the darkness within me, willing it to drape over me like a blanket of night. I have to make myself as unfeeling as stone when I’m on a job, as lifeless as a goddamn rock.

A machine—that’s what I become.

I glance at my burner cell when it begins to vibrate against the bedside table.

“It’s okay, little man,” I say, stroking Sparky’s head as I stride across the room.

“Yes?” I say, picking it up and answering.

I’ve been working with this man for a decade and, as far as he knows, I’ve never heard his real voice. What he doesn’t know is that I’ve done some research of my own and long ago discovered that he’s a CIA operative with links to the industrial-military complex.

When Uncle Sam has problems he needs taken care of, he contacts men like me, men who will take out the trash for a hefty paycheck.

Men who are disposable if shit goes south.

“I’m sending you the coordinates now,” he says. “Your target is Dobry Kuznetsov. A picture will be attached with the coordinates. Limit causalities to the target alone. Limit exposure as much as possible. I am sending another file, proof of funds in escrow. These will be released when you provide photographic evidence of the job.”

I don’t say anything.

We’ve been through this same routine a dozen times, at least.

I place the phone down and wait for the files to come through.

In the meantime I drop to the floor and start pumping push-ups, feeling my muscles ache coolly, a satisfying feeling that moves through me and tells me that even after all these years my body is still carved of goddamn steel, still ready to break bones and scale buildings and slink silently like a panther if need be.

I turn over to start some sit-ups.

Sparky perches on the end of the bed, watching me curiously.

It’s a pain in the ass, leaving him in this motel room. But he’s used to it now and I’ll only be gone a few hours.

As usual, I’ve made plans just in case I don’t return. I might be the best at what I do, but even experts make mistakes. If I haven’t returned by tomorrow morning, I’ve paid the motel manager to come and collect Sparky and take him to a shelter … a shelter I already have an agreement with.

Sparky is never to be put done, I told them, handing over a wad of cash, ten grand in total. Even if nobody adopts him, he’s never to be fucking put down, you hear me?